History: Ethiopia is the oldest independent country in Africa and the only African country that evaded colonial rule. For five years from 1936 – 1941, Ethiopia was occupied by Italian forces. The country was ruled as a socialist state by a Military junta from 1974 – 1991. Only in 1994, Ethiopia adopted a constitution and the first elections with participation of several parties took place in 1995.

On the map you can see the neighbouring countries and the central location of the country’s capital city Addis Ababa. 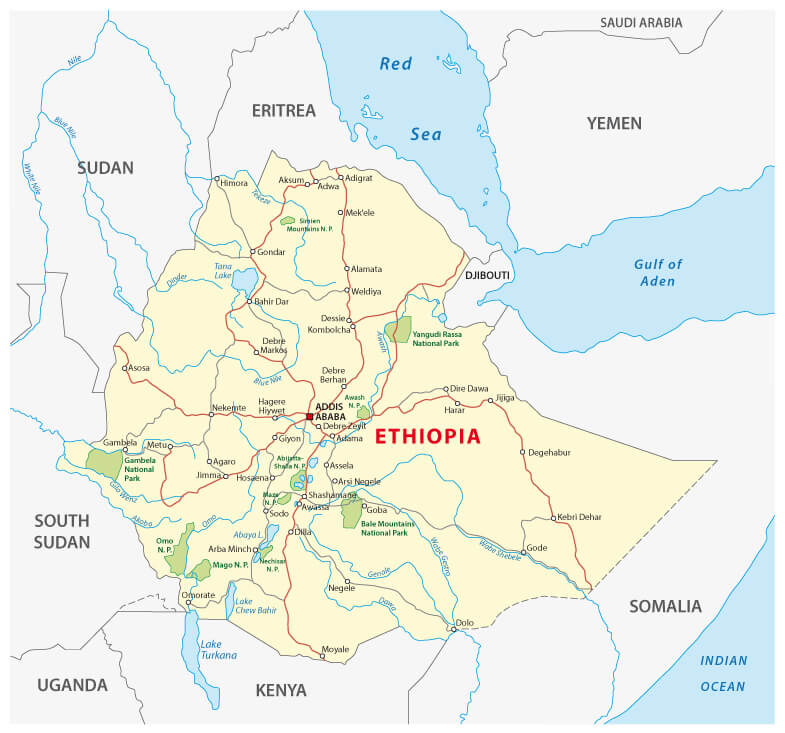 The country is located on the African continent in a central and eastern position on the Horn of Africa. Ethiopia is a landlocked country and its six neighbouring countries are:

Ethiopia is roughly twice as big as Texas/USA or five times the size of the UK.

The country entirely lies within the tropical latitudes, thus the lowlands have tropical savannah or desert climate while the higher mountain plateau experiences a more temperate climate. 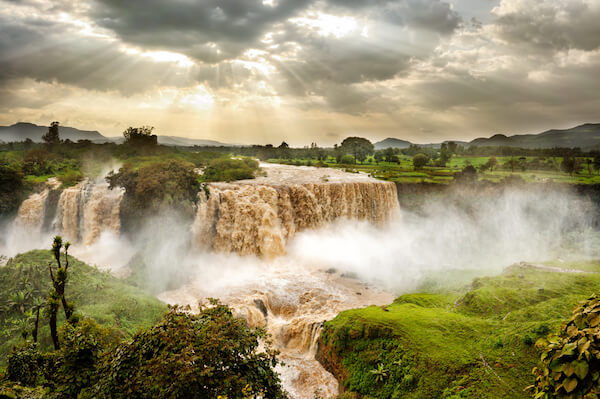 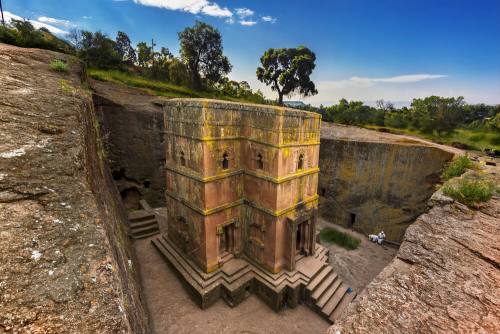 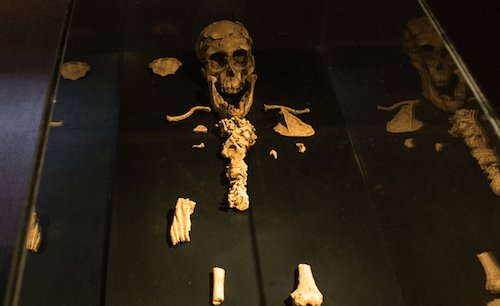 Gondar Castle: This building is also called Fasilides Castle as it was built by Emperor Fasilides in the 17th century. Gondar was then an important agricultural and trade centre in Ethiopia. 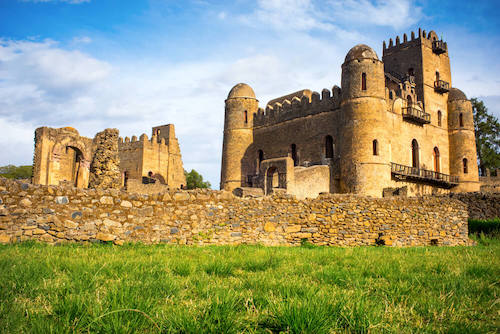 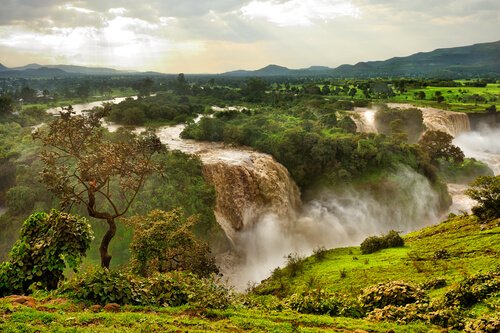 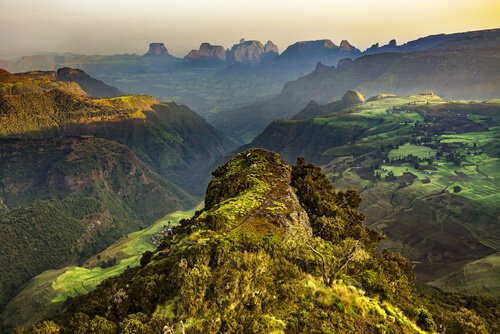 The economy in Ethiopia is mainly driven by agriculture and fisheries due to the favourable climate in many regions and the many rivers of the country. 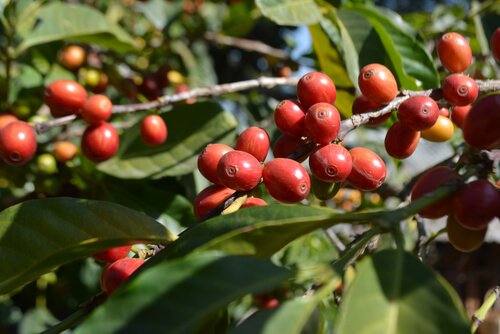 Coffee is the biggest export product of Ethiopia. Other exports include oilseeds, vegetables and gold. The main export partners are Sudan, Switzerland and China.

Mining plays a role in Ethiopia as well. The main resources are gold and tantalum, a metal which is used in electronics. Rock salt is mined as well as is marble.

The energy used in Ethiopia is firewood and charcoal, but more and more also hydroelectric power stations are built which however also threaten the homes and traditional lifestyle of the rural people.Ethiopian airplane – image by Fedor Sidorov

Did you know that Ethiopian airlines are the largest African airlines?

Ethiopia is the second most populous country in Africa – after Nigeria. Most people live in the highlands in the northern and western parts of the country.

Ethiopia was affected severely by drought and famine in recent years. In 2016, Ethiopia experienced the worst drought in 30 years and many people fled from the affected areas.

Only one in five Ethiopians live in urban areas, such as the capital city or in larger towns. Most people live in rural areas and work in agriculture.

The eastern parts of the country are only sparsely populated. In rural areas many people live in traditional huts.

Ethiopians are very religious people and most of them practise their religion regularly. More than half of the population are Christians and mostly follow the Ethiopian Orthodox Church which is one of the oldest Christian churches in the world.

Although not as dominant in Ethiopia, more than a third of the population follows the Islam teachings. The vast majority of Muslims live in the eastern lowlands of the country while most Christians live in the northern highlands but their influence is more obvious countrywide.

Ethiopia has one of the highest birth rates in the world. On average a woman gives birth to five children.

While one in 25 people in Ethiopia is overweight or obese, however, one in four children under the age of 5 years is underweight!

Healthcare is scarce in Ethiopia, as there are only three doctors for 100,000 people. In the USA and Europe, there are about 400 doctors for the same amount of people!

Amharic, Oromo and Somali are the most widely used local languages. English is taught as first foreign language in schools.

However, many people do not only speak their local language, but also English, French and Arabic are widely spoken.

Amharic is an ancient writing system. The smallest unit in the writing system is called Fidel and each character consists of a consonant and vowel sequence. The Amharic writing looks like this:

This is from Article 1 of the Universal Declaration of Human Rights.

Coffee, beans, oilseeds, sugar cane, corn and cereals are the main agricultural products in the Ethiopia. 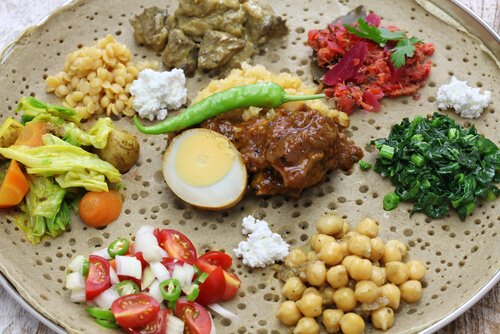 Pulses such as lentils or chickpeas, beans or corn are common in dishes as is beef, lamb and fish. For religious reasons, pork is not eaten in Ethiopia.

Here are some typical Ethiopian food and dishes:

Ethiopia is home to many rare and endangered animals and plants. Unique to Ethiopia are the mountain nyala and the Simien jackal. The country is also known for its communities of black and white colobus monkeys and the gelada baboons. 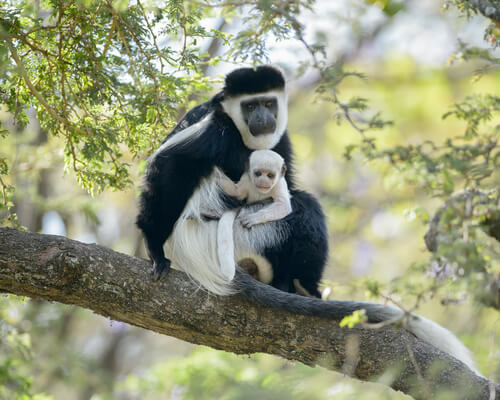 In the lowlands many antelope species, wild pigs and monkeys roam freely. In Ethiopia there are more than 20 national parks and game reserves where animals are protected. 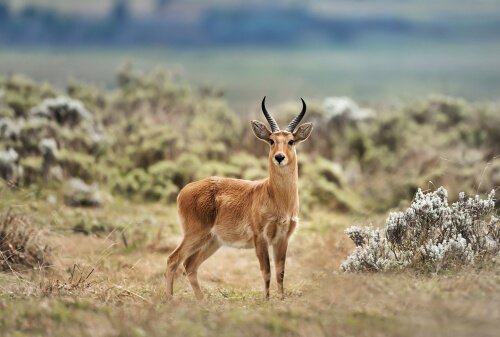 Ethiopia Facts: Did you know…?

Abiy Ahmed is the Prime Minister or Head of State of Ethiopia since April 2018. On 11 October 2019 he was awarded the Nobel Peace Prize.

The Chief of State or President of Ethiopia is Zewde Sahle-Work, who is the only female president in Africa! She was voted by parliament unanimously in October 2018.

The African Union has its headquarters in Addis Ababa.